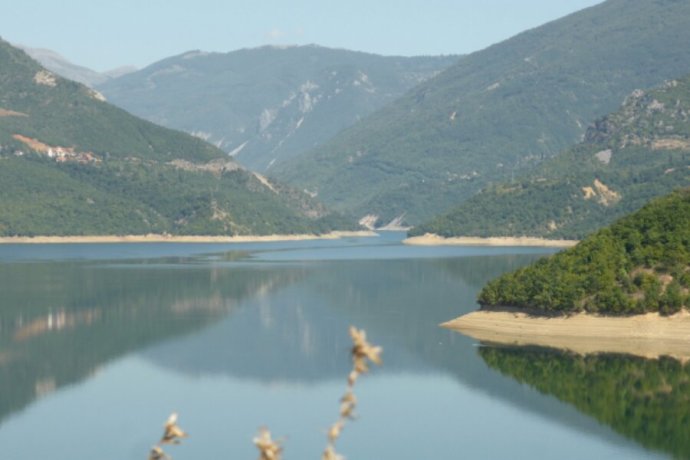 Where will you get water from??
From a source that we don’t have in the UK anymore, roads side fountains. They are very common everywhere. Villages and town usually have a communal tap, although you may have to ask around to find it.

At just under a Euro, these plain thick yoghurt drinks are great for nourishment and refreshment. I usually add a little sugar.

The road from Debar to lake Ohrid follows a gorge carved by water and road. It’s here I notice signs warning you not to photograph certain areas. This only has the effect of making me stop and gawp at whatever you are not to photograph while pondering what the view is like on google earth.

Struga and Ohrid
The water from the take is so clear, if not a bit cool because it is fed directly by an underground spring. Ohrid is a gem of Churches, archeology sites,  castles all packed into one small area best explored on foot. I was lucky enough to find a 10 Euro a night 3 bed apartment with kitchen – in the town centre and all on the ground floor so I could wheel the bike inside.

This church was only build a few years ago

Cycle tourers, not so common here
Met two cycle tourers, a local and a German. The German guy worked for a government office fighting corruption. Although by his own admission there is not much of it in Germany,  “We must go looking in countries like Greece for shady deals by German companies”. 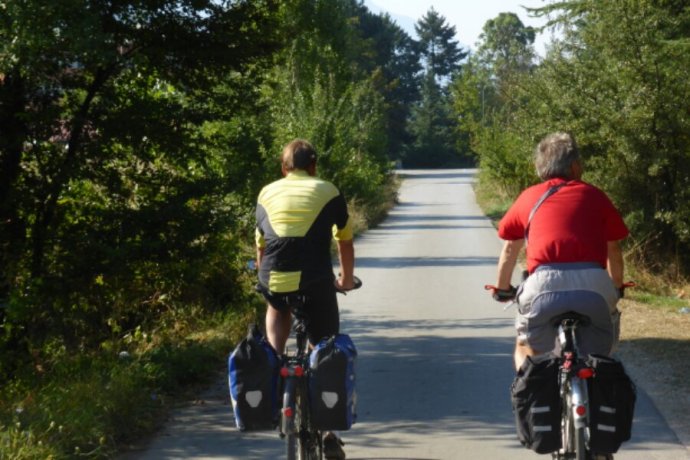 Pile Village
Based on the finding of a nearby archeology site is the reconstruction of a neolithic settlement. 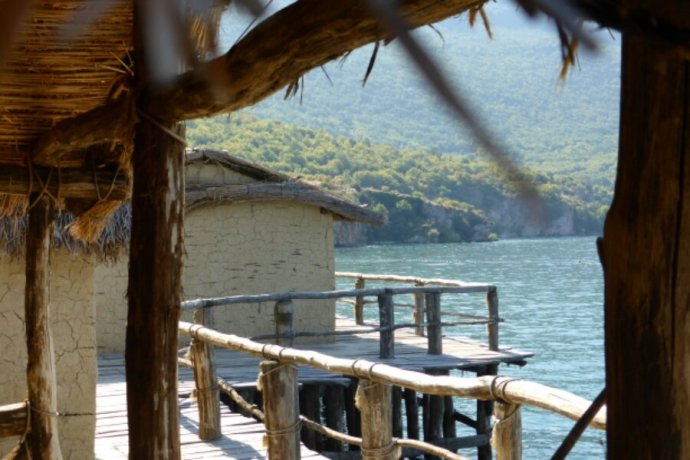 Walking up to find a horses head in the bed is bad enough, but this...

Connecting the lakes
The two lakes are separated by a large hill that just had to be climbed.

Cross and the Crescent

Old road new road
There is an old road and a new road, I of course took the rarely used old road cobbles and all. It was the death of many small villages that relied on passing traffic. Most business have moved while in places are the remaining remnants of old garages and long defunct communist era cafes.

French cemetery of 5000 in Bitola 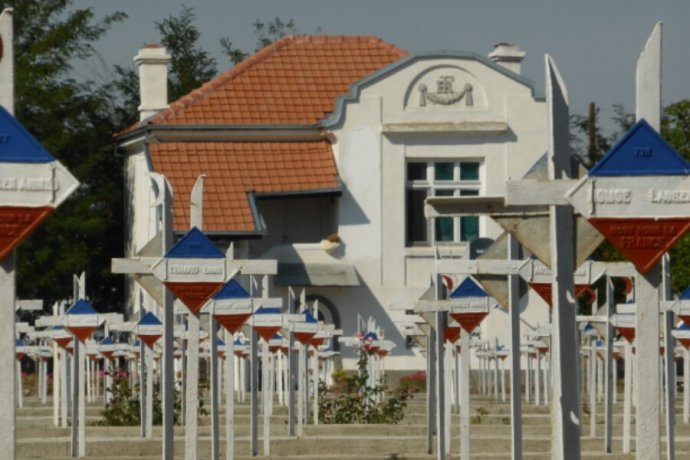 Prilep
A bit of a let down. On a national holiday celebrating independence in a town that played such a big role in past events I expected it to be interesting. But, holiday is just that. The museum explaining the towns role in WW2, fighting the Italians and Germans was closed. Tourist information, closed. Everton worth a visit, close. Just lots of people sitting in Cafes drinking coffee and smoking cigarettes.

Power of the plates can fold mountains 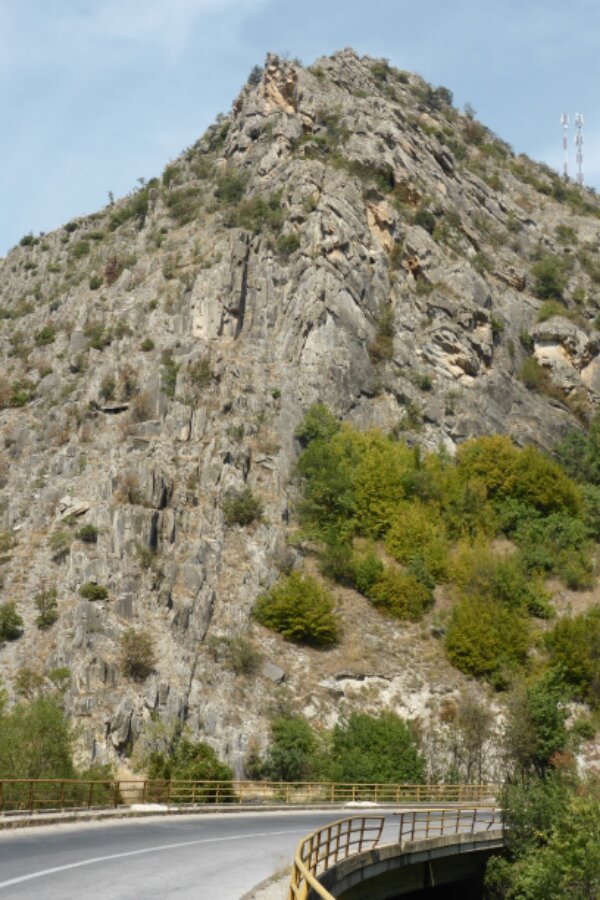 You don't have to be a geologist to notice a very interesting feature here. When I see things like this and hear people talk about how fracking is causing earth tremors, I agree with them... in the same way that I agree boats at sea create waves that contribute towards coastal erosion.

Wine country
Entering Kavadarci involved a 700 decent that took 45 minutes. It was a thrill. The past week has seen nights drop to single digit temperatures and now its back the the 20 again. I can hold off buying those woolly socks!

Weight of the grape
I noticed growers congregating, I had to find out more..

They take their harvest to a buyer who grades and weighs the grape. They resell to a winery in large volume who use fleets of articulated trucks to do the pickups. Kindly invited for coffee and a chat with the boss, she gave a fascinating insight into the business of the grape. I was sent on my journey with a generous gift of 1 litre of Reijki, a 50% vol grape spirit.

Lake Dojrian
I arrived in a social mood in this little hot spot near the Greek border.  I have a with a few dinars left for a blow out. Sadly after 7pm everything is closed due to lack of customers. I think it’s more of a weekend scene. Nice lake and again miraculously, no mosquitoes. I’ve not been bitten once in this country, although it’s probably too cold for them in the mountains.

Good restaurant does NOT mean good food
It’s an age old problem I constantly battle with. People are very helpful in giving you what they think you want when it comes to recommendations. Make the mistake of asking for a good restaurant and you are sent to a posh dining establishment or hotel restaurant  there they serve pizza, burger and spaghetti. It’s often very poor quality and the food is never hot and always cold by the time you are half way through. I learned this fact about eastern European dining a long time ago.
It’s the same with coffee, I have been sat down for coffee and everyone is served up delicious strong Turkish style coffee, mine arrives.. Nescafe, because it’s the posh expensive stuff they give to guests.
You have to be very specific about that you want. My quest was a traditional dish called ‘Tavce gravce’. I don’t ask for a good restaurant or even where can I can get good Macedonian food. I say, “Where can I get Tavce Gravce?”
The reaction is usually laughter, followed by why would you want to eat that. Strange looks. “Why would you want to eat that, it’s the sort of thing my grandma used to force me to eat…”. Now you see what I’m up against! 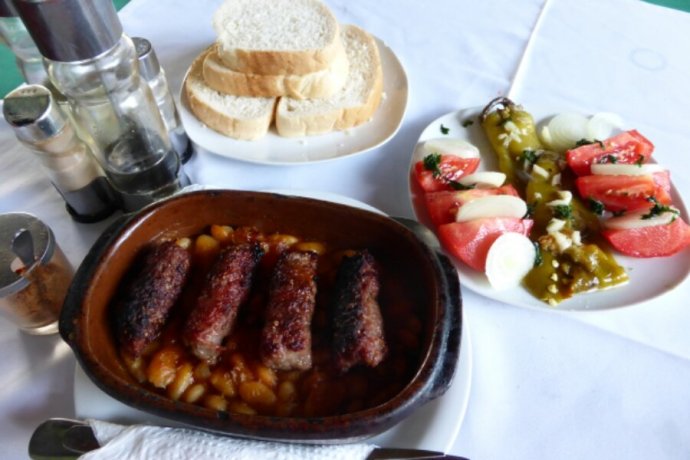 My hunt for 'tavce gravce' a traditional dish (read above)

Be careful, you might get what you ask for..
If you don’t understand what’s going on,  only point to something someone is already eating. This is quite difficult in Macedonia because all people seem to eat is coffee and cigarettes. 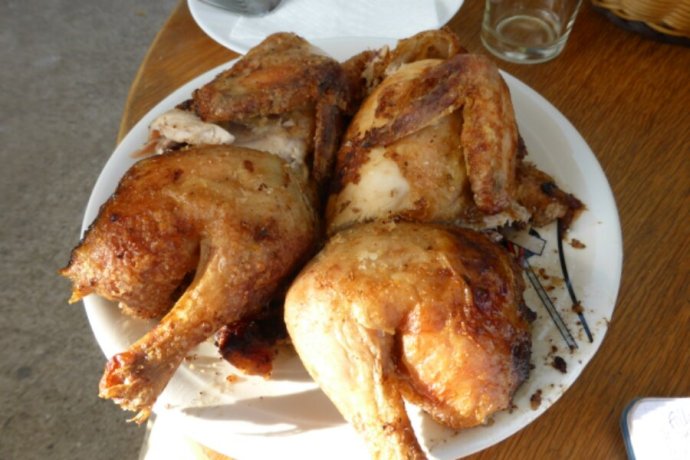 I asked for chicken, so this is what I got, along with looks of why would you want to eat it like that by the 'chef'. It's a full size plate and quite a big bird, even I struggled.

Money
You can be mistaken for thinking you are rich. This will but a yogurt drink. Each note is about 14p