Turkey: Central and Southern coast.. Sub zero temperatures and ‘Festival of the Sacrifice’

Holiday
“Where are you going next?” (or gestures to that effect)..
When I reply the common reaction is to slide a finger across the throat and make blood gargling noises – then grin at me.
What am I to make of this? Murderous bandits? Dangerous roads?
It fired my interest but further requests to elaborate involved more finger slicing actions. It soon became clear the important festival of Byram, or ‘Festival of Sacrifice’ was to start soon. All those goats and sheep that suddenly appeared for sale in pens at the side of the road had a purpose.
The main focus on the day is for all generations of family to get together, ‘prepare’ food and feast. What’s left over goes in the freezer.
It’s best described with the following photo montage.. 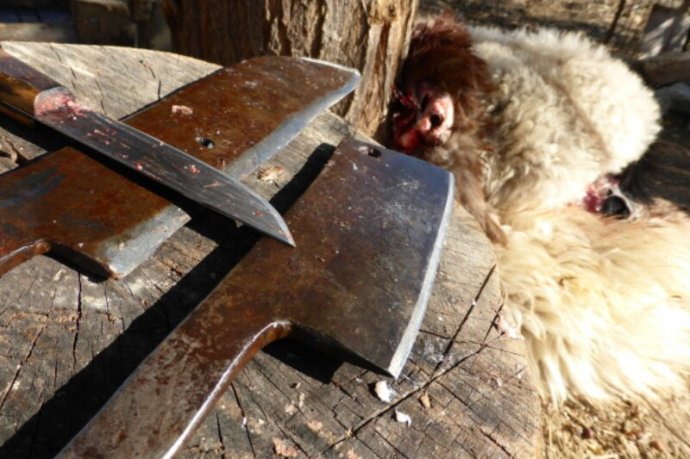 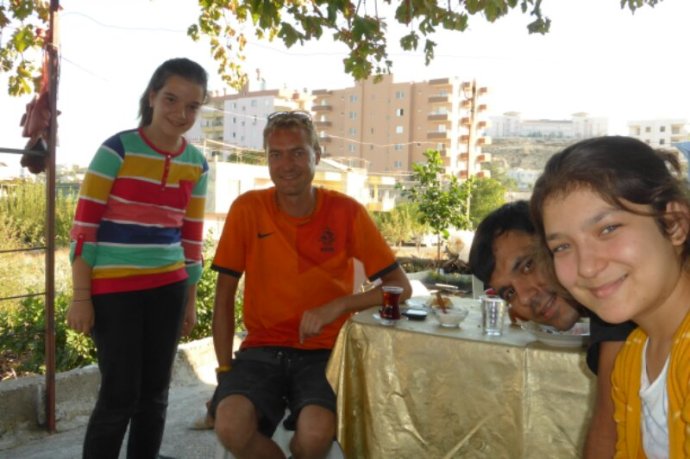 Escape from Istanbul
Its more of a cruse from Istanbul. Biking around the centre is safe and fun but trying to cycle out of the city through the suburbs is not. I opted for the ferry from Istanbul to Yalova which is big, fast and modern. Climbing out the Yalova was easy on the wide road and soon I reached a lake whose shore is covered with olive groves.

Iznik Golu: Surrounded by Olive groves. The town in the middle process and sells oil by the bucket load

Most of the traffic was to do with road building. View of a typical rural road. 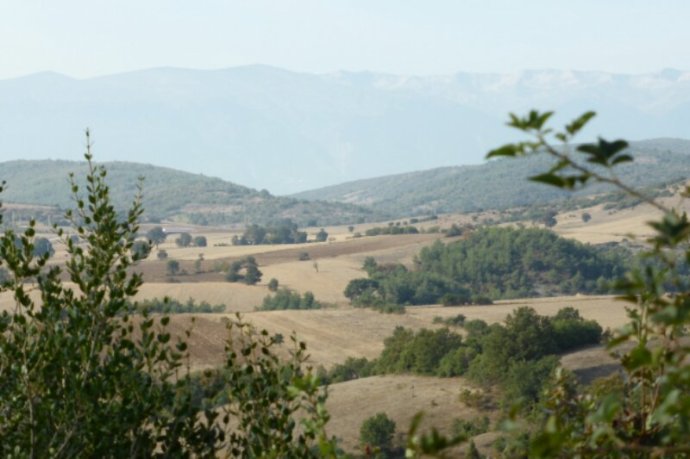 Central Plateau
At around 1000m above sea level, the temperature is noticeably different. Only one cure, stop for some hot food: Kofte, but look at all the trimmings it comes with!

At this point the temperature really started to plummet, down to the single digits at night.

Another restaurant experience: Middle of nowhere, nobody eating. Taken to the freezer and was pointed at varying slabs of frozen meat. I was asked lots of question I didn’t understand.. Eventually I gave up, sat down made a plate shape with my fingers on the table, indicated I wanted to eat and crossed my arms. This is what I ended up with. 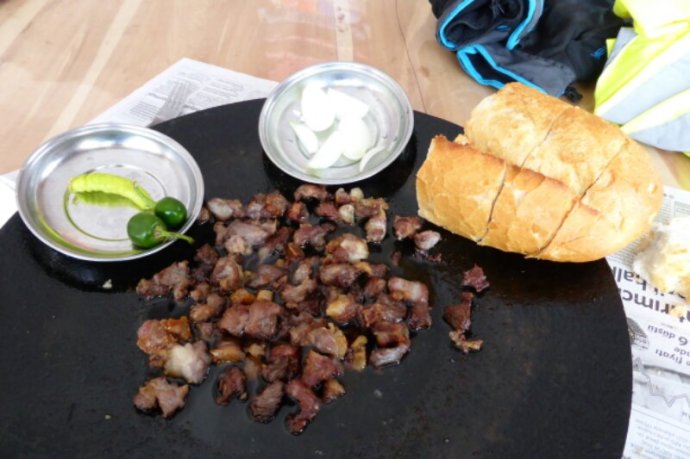 They had a small butcher counter in the corner – order the meat and it get cooked up for you. Simple, if you know how it works. I do now,  although it was rather chewey.

Marble
Eskisehir is well known of the quality of its marble. The blocks I saw being worked on look like slabs of sugar loaf. A photo montage from extraction to final product, gravestone embellishments. 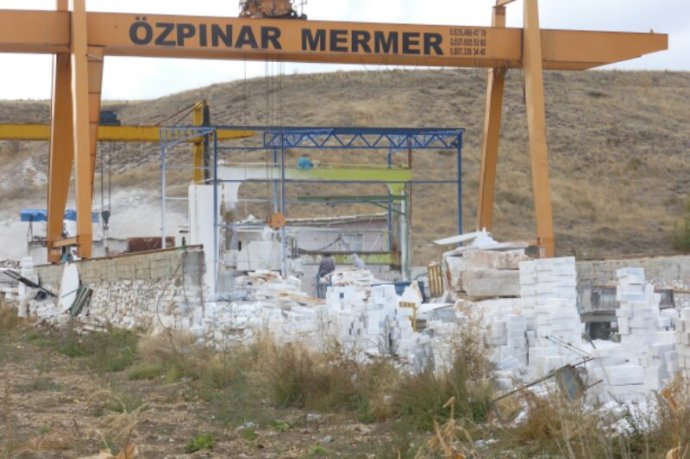 Machine on a lathe, this a balustrade.

Polish, yes that is an angle grinder.. Then the different grades of sandpaper come out. Then a polishing 'slurry'

Cold snap
At over 1000 meters above sea level the central part of Turkey is a good deal cooleer than the coast. Temperature dropped below freezing at night and hung around 10 degrees during the day. Experiencing a very sudden drop in temperature towards the end of the day, something told me tonight is going to be colder than last night. Last night I wore everything I had in the sleeping bag and this included 3 pairs of socks, full waterproofs, fluorescent tabard and a towl as an undergarment. I would not describe it as a warm night.
Stopped at at the only mini market in the village. “Pension?”, I enquired.
He fumbled around in a draw and produced a set of keys and unlocked the door to a single room next to the shop. Wow, that was easy I thought. He also indicated he didn’t want payment for it, which I found surprising. I want to buy something from the shop and guessing I was hungry he refused to sell me anything and instead disappeared for 5 minutes to make a full supper of omelette, bread, sliced tomatoes, olives, cheese.. I has hosted in the coffee shop next door also owned by his family and joined to the mini market. Chatted (gestured and drew pictures) with family and customers till early evening. Next day I made a quick breakfast, only to receive a second cooked breakfast. Said my thanks and continued on my way.
On the map the route looked hard and the looks on peoples faces as I continued up the road was a sight. Many people said it can’t be done and I should turn back. I was told emphatically by a villager where I stayed the road was sealed or ‘asphelt’, but it soon became clear it wasn’t. One of the reasons to take it was get an idea of conditions in Cappadocia with sits 1800m above sea level, the same height as the pass. Below are photos of the route from Cay to Yalvac.

Very hungry puppies who wolfed down the bread I gave them so fast they all started to choke. I felt a bit guilty!

The white dusting on the hills is ice.. 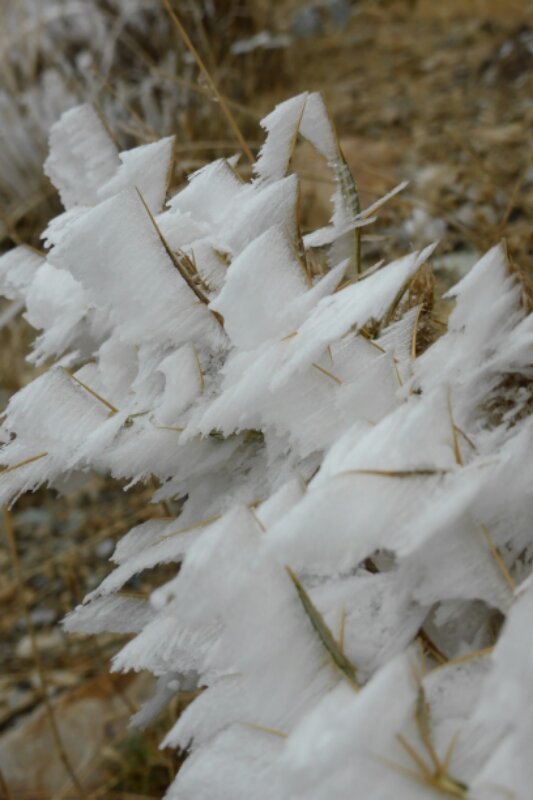 Ice wind sculptures a the top 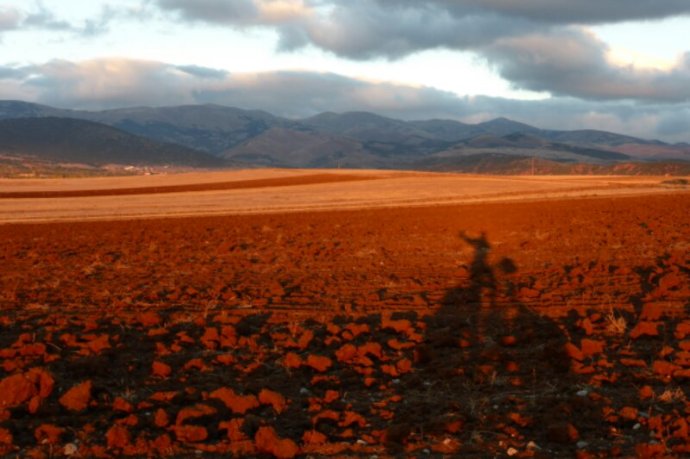 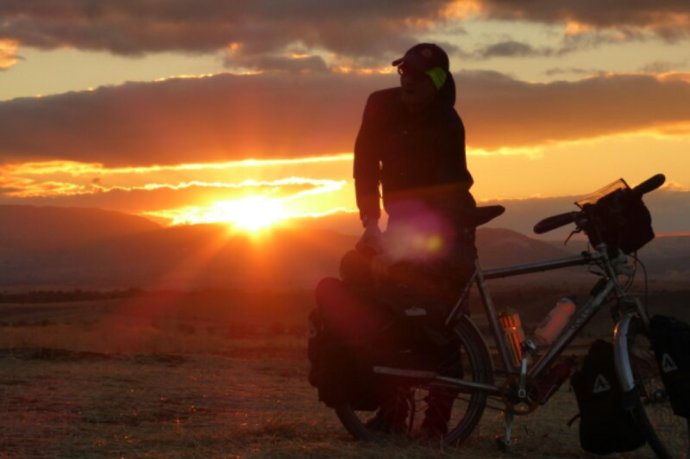 Making camp in the evening

Graph of temperature inside the tent from 11.30pm to 7am

Apple harvest
It’s apple growing region here and harvest time has come. Pickers are out and collection points have sprung up around towns.

I was past handful of juicy apples to the point where I could not fit anymore in my bags..

Invited into a sports shop for Cay (tea)

Pension (guesthhouse)
Fearing another cold night I made enquiries at the mini market. He walked out the door and pointed. “Big building,  Pension”. I walked in met 3 polite lads took me up to the office. I made enquiries about staying, indicated I needed to leave early but all attempts to make payment failed. My room was assigned in this sparking new accommodation block and I noticed I was the very first person to stay in the room. By this time I realised it was the school dormitory accommodation block and maybe they were just too polite to turn me away. After a quick shower I was led to the canteen and I sat down with my students. Everyone was keen to ask me questions with their limited English. All were very welcoming. 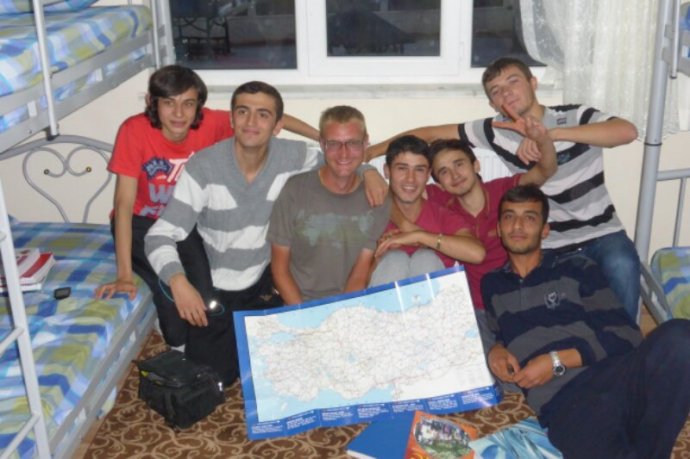 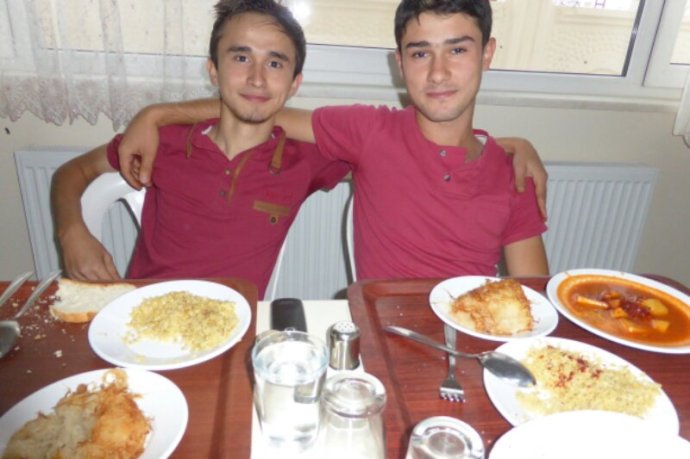 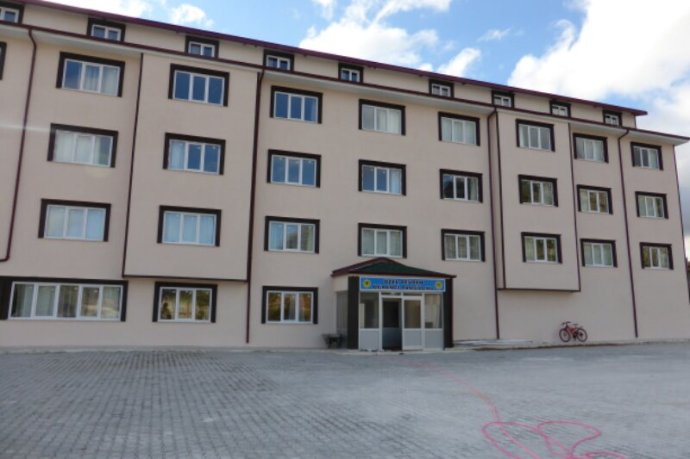 Old rural village scene. This is now quite a rare sight and by no means 'typical' 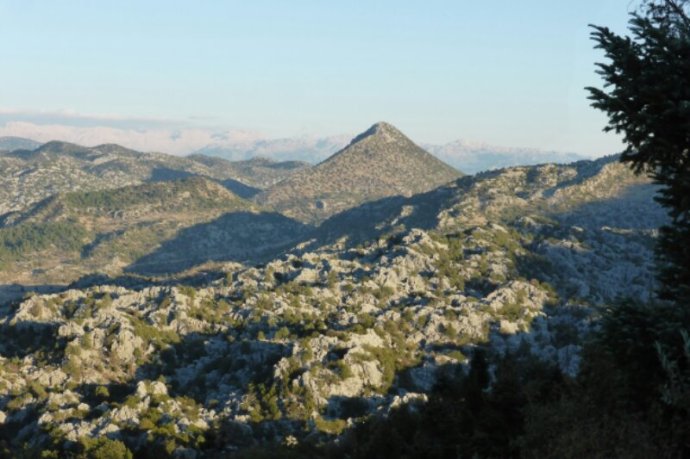 Camping and fish dinner
“How much is the camping?”, I enquired. “Its free”. In this establishment a fish dinner with all the trimmings and unlimited bread is 15TL or 7euro, cheap by Turkish standards. The fish is fresh because it’s attached to a fishing lake!
Joined by a friendly group and passed the evening chatting, sharing stories and asking questions.

Mamout
Not seeing another brit for weeks, I arrived at a beachside campsite with 15 UK motor homes and a couple who were in the process of moving into their Turkish property. Feasted and chatted into the night. Mamout and Snoopy certainly hit it off too!

Alanya
I have kept in contact with a student I met 7 years ago on my last cycle trip. Güven now works for a prestigious bank managing accounts for many of the hotels in Alanya. We explored the restaurants and cafes. His sizable apartment is in the Norwegian enclave of Alanya, “It’s mostly expats here”, he lamented and it did feel very different from any other part of Turkey I’ve been to. 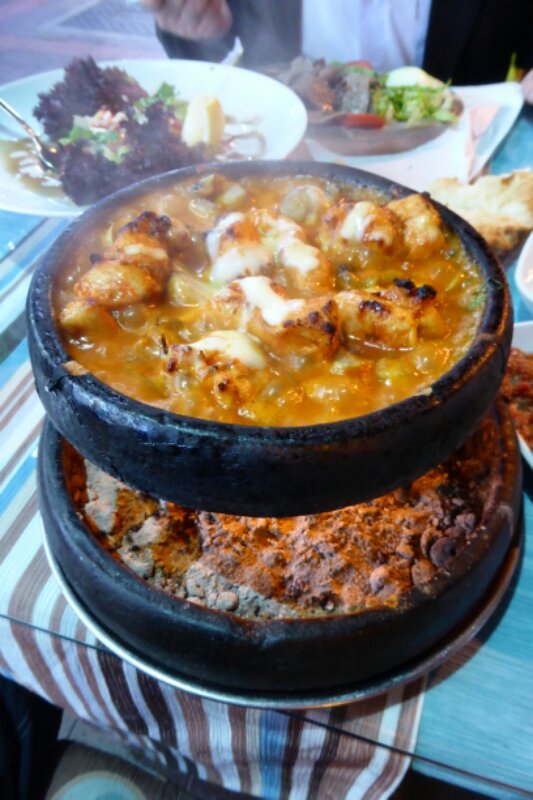 Wow! Hot platter of chicken. It was delicious. 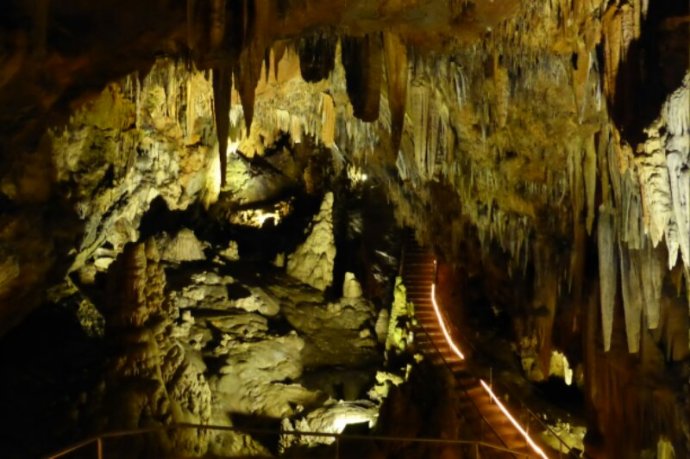 "Dim caves", no guides so you are left to walk around on your own. It was eerily empty with the only noise being the squeaking bats

Anamur banana is grown in great numbers on the terraces and plastics houses. The are famous around Turkey. Smaller and sweeter than imported types

At 1.5meters long, this snake danced in the middle of the road about 10 meters away from where I stopped. Only when a car came in the opposite direction did it scurry off into the bushes

Anamur fort. Right on the beach. Was rather surprised to see 3 Turkish lads at the top constructing a 'Camberwell carrot'. When offered I declined. "No thanks, it's too hot for that sort of thing" 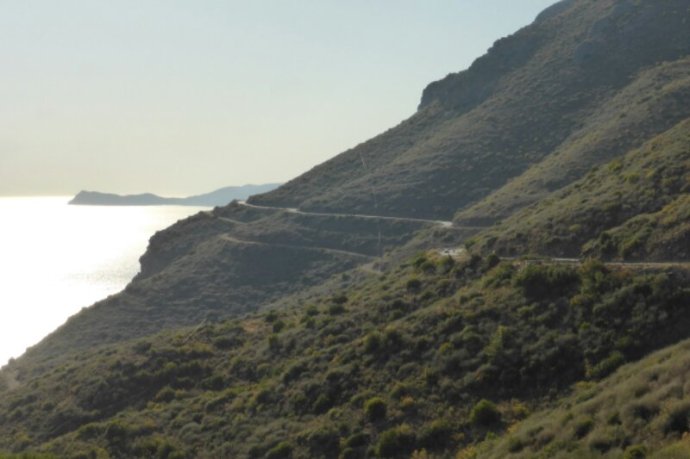 Despite dire warnings of traffic the coast road had 1 car every 40 seconds. If only we can have dire traffic like that in the UK!

Just too late. The Port Said ferry (Egypt) had been cancelled. Ferries to Lebanon and Syria are still running though!

Help always on hand should I suffer a mechanical breakdown 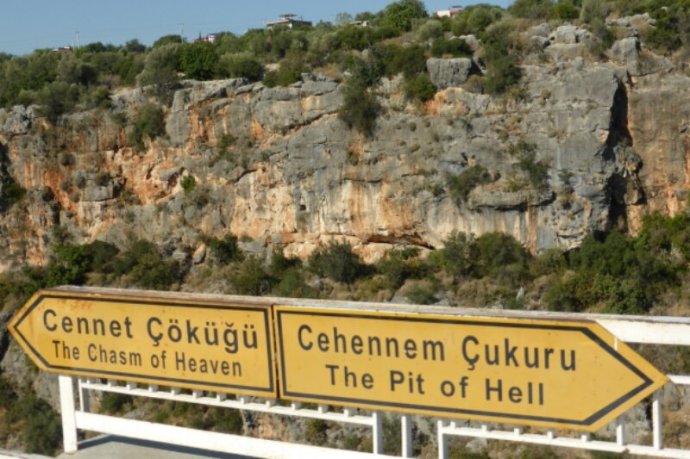 Very much recommended. Walk down over 400 steps into a deep gash in the ground. Then keep descending into a giant underground cavern guarded by a 4th Century chapel. Deeper still following a path warn smooth by thousands of years of footsteps into the bowels of the cavern and you hear the roar of the underworld emanating from the solid rock. It’s infact an underground torrent, but they didn’t know that. It’s a very surreal experience and one to be skipped if you believe in Awks. I had a lovely photo that captured it, but unfortunately a slip of the finger edited it out of existence.

After touring the palace I was invite over to join a family fish BBQ. Was fed and watered with many cups of tea

Make your own wraps in Mersin 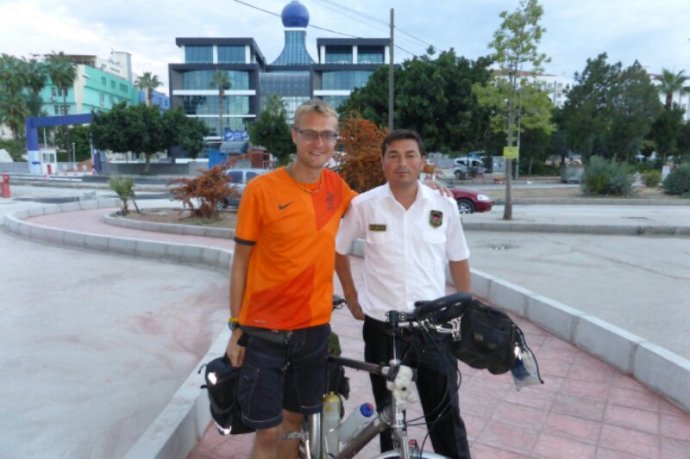 Making enquiries about nonexistent ferries means tea with the customs officer. Very enjoyable, but no ferry.