Egypt: Cat and mouse in the upper Nile

What should be a pleasant ride with the prevailing winds along the shores of the Nile is not possible at the moment due to the gangs of youths on motorcycles that follow me of towns. Everyday so far by 1pm I have been surrounded by 10 or more youths pursuing me demanding personal items or money and trying to open my bags. It’s at this point I’m forced to see refuge. They seem to think I owe them something and would rob me blind if I didn’t either stand my ground or find somewhere safe to shelter. The only quiet time is from sunrise at 6am to 10am and then the problems get progressively worse.

When I’m forced to stop for the day I’ve received nothing but help, support, friendship and a safe place to stay for the rest of the day and night. The next day I starting cycling just before sunrise and this gives me a few hours of peaceful cycling before the games begin again. 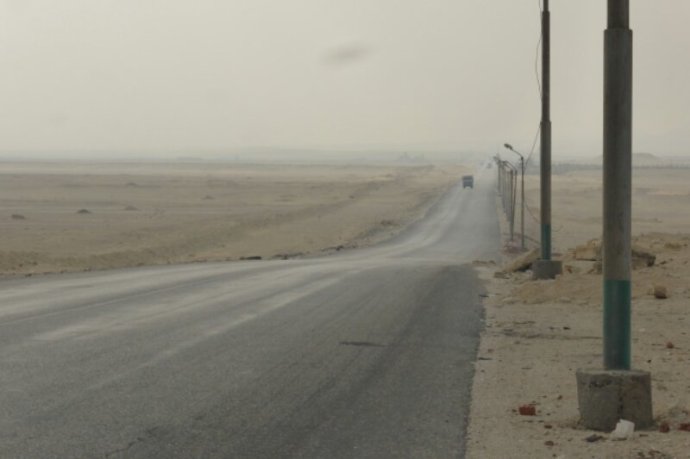 Desert road. I soon realised that this is not the safest place to cycle

On two occasions my refuge for the day and night is one of the many roadside ambulance stations. They are manned by fun and professional staff and someone always has a smattering of English. 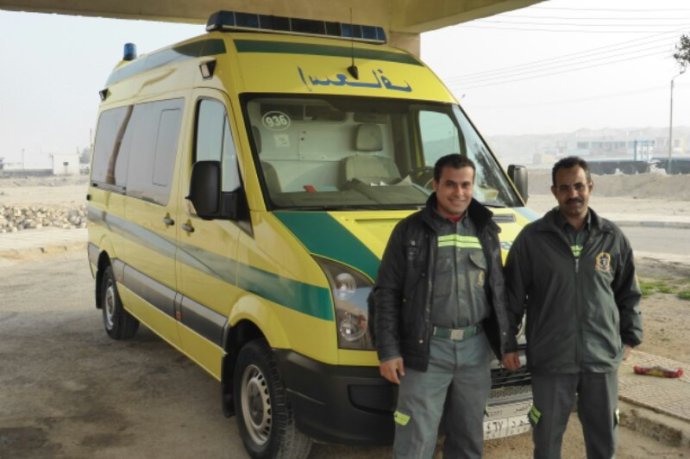 What I find amusing is the mix of political views and ‘banter’ the staff have. Some support ousted president Morsi, some the general. It’s all good natured.

White bricks with the texture and  consistency of breeze blocks are cut directly from the hillside.

My first fall
It had to happen at some point.. A fall from the bike. What was the usual ‘hussle’ by a gang of 3 youths on a motorbike turned out to be something a bit more serious. They stopped ahead and one of them grabbed the handlebars as I passed by. Aided by a stiff tailwind and too much speed it knocked me off balance and I came crashing to the ground. They were somewhat sorry, helping me up and returning an item stolen after I had a good shout at them. 2 days later and still quite painful the doctor indicated that something had broken in my Scapula (shoulder blade) , although the xray doesn’t anything obvious. It may just be sprained.

I must say, Menya university hospital was great. From walking in to exiting with an xray and prescription took 20 minutes. “Is it because I’m a westerner?”, I asked. “No, that’s how long it takes” said the porter. Total medical bill: £1.75

Morning tablets, I feel like a junkie!
2 days rest in Menya as I’ve also picked up some amoebic bug called gardiasis that gives me hydrogen sulphide burps and zero appetite, amongst other things.. I blame the sugarcane juice in Cairo.

My 2 nights rest happen to coincide with the trial of Morsi and Moubarak so being off the road is probably a good thing. Security is tight around town, especially around the hotel. Protests seem good natured carnival type affairs.

View from the hotel window onto a quiet street below.
In the distance is the new museum of Minya that got looted (pyramid shaped building). It’s a very sad story, you can read about it on the Internet.

After being forced to turn back to seek refuge in a near by town I was kindly hosted by the chief and his extended family, in particular Ahmed, a lawyer and Abdul, a student of pharmacology. It’s knowing the people of Egypt are just like them; kind, helpful and generous.. It restores my faith in the people of Egypt. 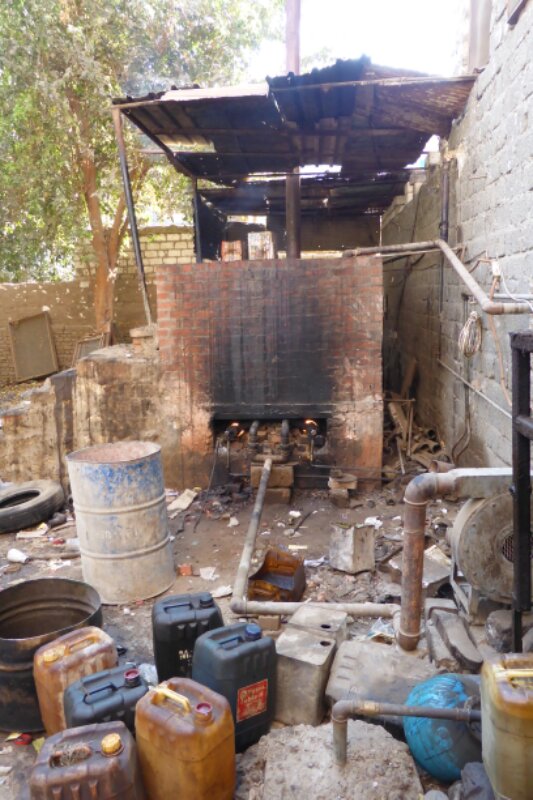 One of the many family businesses is sugar molasses. They are produced from the locally grown sugarcane.

Finished product into jars and boxed up.

Me Abdul and bike.
We all went for coshary, the most popular Egyptian food takeout.

Sold everywhere, around 40p for a meal and very filling it’s.. Lentil, chickpea, dried onion, spaghetti, macaroni and rice. Added to taste are tomato sauce, and in the two vessels, garlic/lemon and chilli that are added to taste. 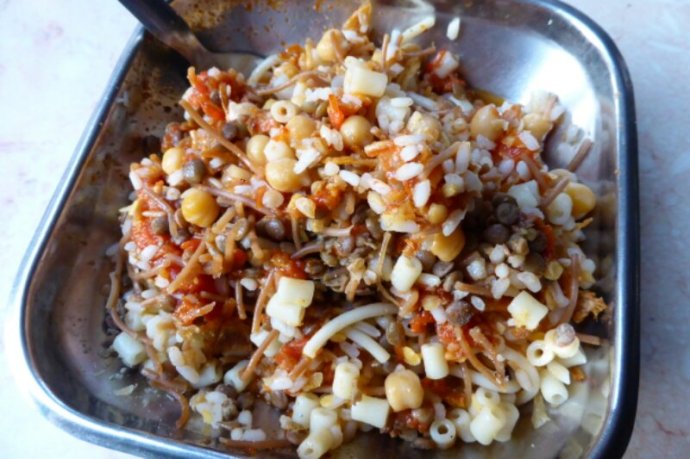 When mixed it’s ready to eat.. It looks like this. Yummy! 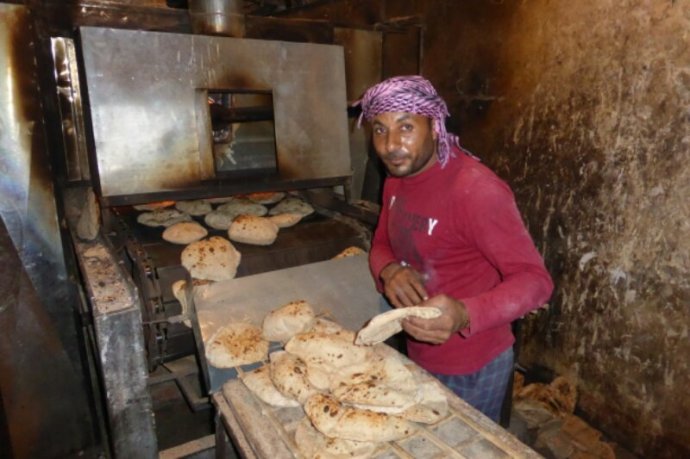 Cooked on a moving belt.. Flat dough in one end, 15 seconds later, flat breads out the other end. Very efficient.

Mohammed, kindly showed me around his university town. Also a great help at coaching me in Arabic phrases to use on the road.. (none of them kind!) 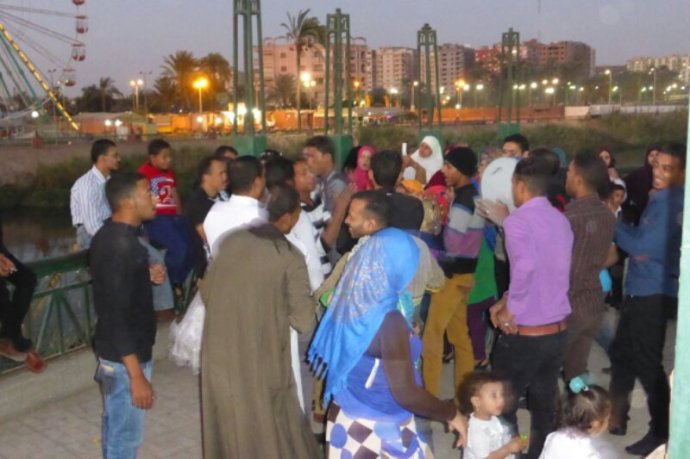 Countryside wedding party celebrating in town. Stayed in the YMCA club, a great place. Watched the sports day from the balcony in the evening. Liked it so much I stayed for 2 nights 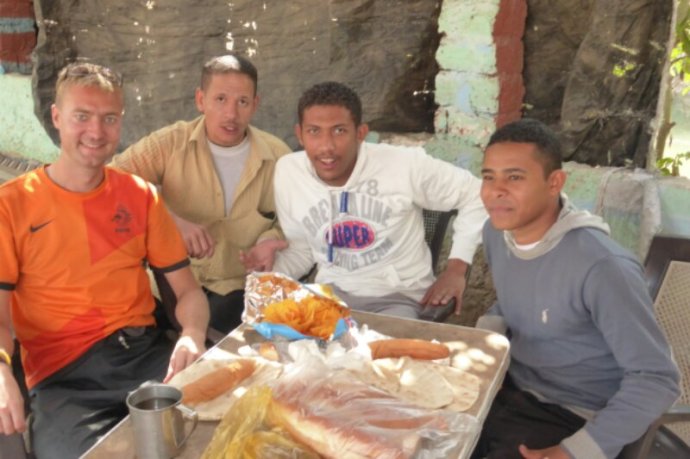 Chatted to a group of students at a roadside cafe after being pursued by youths with sticks. I was near a city so I managed to evade them.
As a matter of policy, the hotel inform the local police when a foreigner checks in. They called by to say hello.. 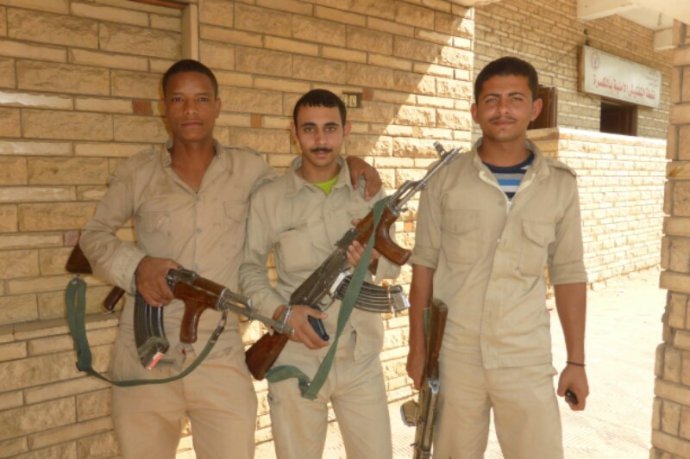