Ethiopia: The North, warts and all

My cycle buddies, Aurelien and Thorsten add positively to the whole experience. It’s great fun to figure things out together, discuss thoughts and experiences and relax in the evening without the feeling like you should be doing something.

Ethiopia is richest country I have visited in Africa in terms of water, soil quality, forests, land suitable for agriculture and cattle, mineral wealth and a huge workforce (albeit an underpaid one). There are pockets of dry rocky and barren land in the north east that people remember from the TV during the famine but that does not represent the country as a whole.  Much more interesting cycling is to be had due to the mountainous terrain and being higher up, it’s cooler too.

Unlike more developed African countries there has not been a migration to the cities to seek employment which means there is still a high rural population density. For the most part roads are lined with little homesteads and lots of people. Heads bob up from bushes as you go by and when you stop in the middle of nowhere small crowds start to gather.
There are a couple of problems faced in Ethiopia which are well known and considered a ‘rite of passage’ for anyone who cycles across Africa.

Sorry if what follows sounds like a bit of a rant. Did I enjoy cycling through Ethiopia? Yes. There are so many positives such as the culture, dress, way of life, landscape, religion. All the things that endless occupy my thoughts just like the other countries which I talk about elsewhere, so I’m not going to repeat it here. The problems are a bit of a slap in the face and the scale of the problem is unique to Ethiopia.

Stones
This gets the most press. Occasionally kids throw stones at you and teenage girls seem prone to do this, but it’s well known to be a problem so it’s something to be expected. They don’t want to knock you off the bicycle and it’s just an impulse reaction to get your attention. Nearly every time they miss, which is deliberate because pinpoint aim is something they do have after years of practice herding goats (by throwing stones). It doesn’t bother me.
This need for your attention is also shown by both adults and children by the fact when you pass a pedestrian, a person working in their field or just sitting around watching the day go by they shout “You! You! You! You! You! You! You! ”. If they get your attention the next question is “Where you go?” Occasionally they’re happy with your answer and reply with “OK” and a smile. Quite often it leads to my next subject.

Begging
For a country that has never been under colonial rule for any period of time and is very proud of how it has kept it’s independence we are surprised how often people expect us (obviously representing white people in general) to fix their problems. The solution (their eyes) is for us to hand out money, pens and clothes. Here I disagree with the majority view. My jaded view of the subject is it’s not the responsibility of the white man to spoon feed Ethiopia, but for Ethiopians to pick up the spoon in front of them and feast on what they’ve got.

A short video clip. Pursued for 5 minutes by these kids asking for money I had enough. I wanted to see their reaction when I turned a camera on them. They stopped immediately. Imagine the first 2 seconds of this clip and loop it in your head for 5 minutes. Imagine the whole day being punctuated with long periods of begging and multiply it by time taken to cycle the length of this huge country. In short, it grinds you down.
Constant begging by both adults and children is much harder to deal with that the hills and It’s a problem for some Ethiopians too, especially business owners.

Business Opportunities Galore!
There are also huge business opportunities to be had here. Everyone complains about the price of chickens and eggs, but I’ve not seen a single chicken farm. I met a group who made a major detour with their car because they could not bargain down a price to cross a small river to less than $300USD. Travel is difficult due to a shortage of minibuses and everyone is waiting for transport after lunchtime. Many basic goods such as biscuits, chewing gum and jam are imported through Djibouti from Jordan, Saudi Arabia or further; that can’t be cheap??
In small towns and villages, cafes advertising delights such as cakes and pastries rarely have anything to offer. On the occasions we did find (edible!) snacks, they are busy and selling like, well, hot cakes..
On the plus side there seems to be investment in schools, clinics, hospitals and roads by the government that is very visible even especially in the rural areas. New buildings are springing up and I’m constantly told things are much better than just a few years ago. Without such infrastructure, it’s difficult to industrialise although telecoms and electricity are down more than up outside Addis Ababa. In a country that is experiencing rapid growth and has the potential of sustaining this for a long time to come, why is there the common aspiration to move to Europe to make money? I explain Europe’s economies are stagnant and (in my opinion) the best and easiest place to start and grow a business is on their own front doorstep. The biggest barrier I feel is the sense of apathy that prevails in the rural areas from those who beg. It’s like they too have been ground down over time.

Crowds
You are never alone or short of people to talk to. It’s a blessing and a curse because you have no choice in the matter. I’d hate to be famous. An empty cafe on the outskirts of a village looks like a good place to stop for a ‘Marinda’ (Fanta) and a bite to eat. Soon 2 inquisitive heads become 4 becomes 8 becomes 50. They are never aggressive. Occasionally it becomes lively and rather animated. The quiet stop boost the flagging sugar levels and rest from trials of the road both physical and psychological end in you not being able to hear yourself think. I prefer to eat without an audience. Thoughtful owners often assign someone as ‘security’ to watch the bikes and tell people to clear off when crowds start gawping. It’s not a problem in towns or cities. 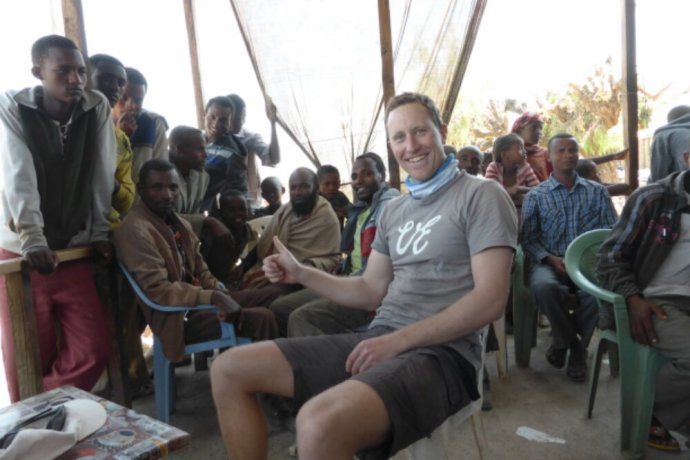 I quiet cafe springs into to life

An audience gathers to watch the most mundane of things..

Even when behind closed doors..

Don’t touch the bikes. A hand on the handlebar, quick test of the breaks, changing the gears, trying out the saddle for comfort and pleading to take it for a ride up and down the road. This proceeds lengthy discussions where you try to explain it’s a bad idea to ride a fully loading touring bike to someone who will never understand. This inevitable sequence of events conveniently nipped in the bud by a firm but polite “Don’t touch” when the first finger touches the bike. Problem solved. Besides, Aurelien’s bike is not very stable on its stand and can crush a small child should it fall on them, which it did once when we weren’t looking. No permanent damage was done, not sure about the child though.

Metema
In the Sudan half of the town you have Sharia Law, in the Ethiopian half you have rows of bars and legalised prostitution. What a contrast! I had visions of Mexico border towns but Metema was pleasant and surprisingly quiet. Alcohol is now back on the menu!!

What a welcome sight after 1 month of Sharia law. 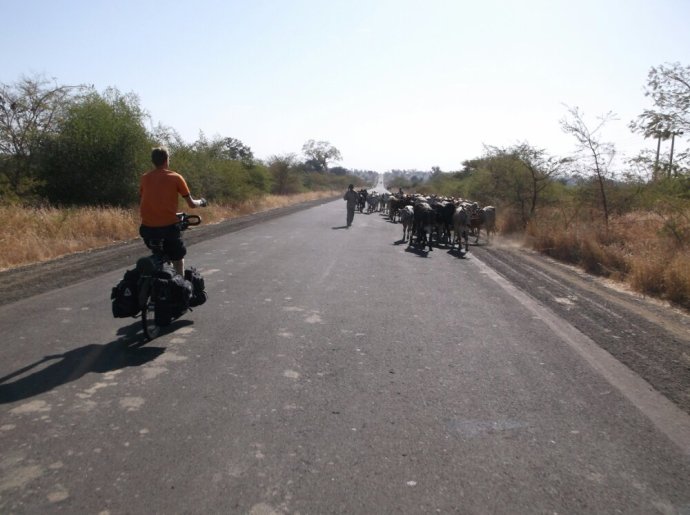 Small Northern hotels. Sadly often infested with bed bugs, fleas, lice and rats.. This one scored 3 out of 4.. (there were no lice!)

Pit stop, the heavy traffic was not moving very fast.

Where to get water

Former capital of Ethiopia. The royal palaces can still be visited. 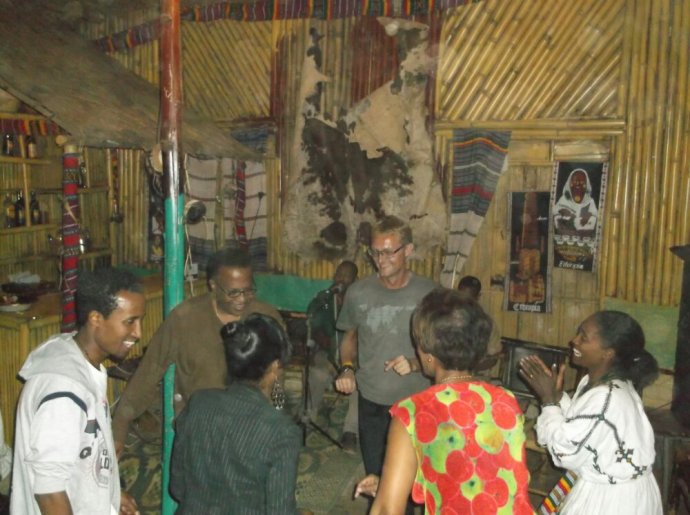 Involved a night of local singing and dancing after our Christmas meal.

Drinking honey wine followed by a successful hunt for rum and coke. The bottles do look like medical samples jars..

Lalibella
The famous rock hewn churches and UNESCO site. Our 3 hour visit cost $50USD each, which was a bit of a surprise. This doesn’t even get you a leaflet, guide or escort around the site. We did this as a side trip from Gondor. Travel down by minibus taxi involved an overnight stop and a 4×4 for the last leg of the journey.
Getting back was more problematic.. After midday there is no transport out of Lalibella. We hitched a ride on a vehicle that was going for some welding work. Then negotiated a long stretch of the journey in a 4×4 that was going in our Direction. Then that driver managed to get us on a truck transporting eucalyptus wood to the outskirts of Gondor. We jumped in a Tuk Tuk for the last leg back to the hotel. It took 12 hours, None of it on public transport (shared taxi minibus) because they had all finished for the day when we arrived at the various destinations. More memorable than the visit to the churches!! 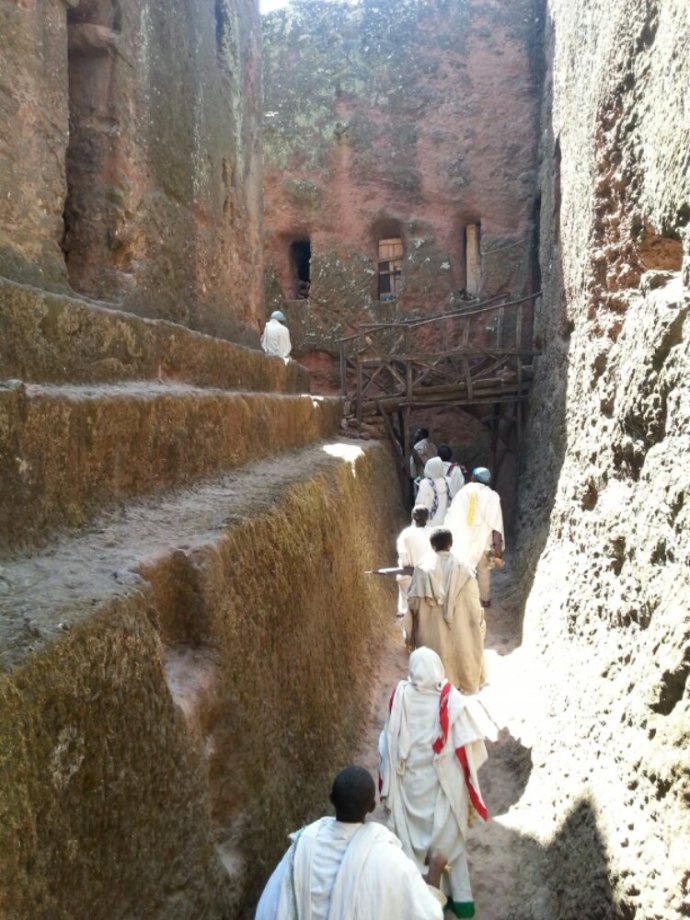 Very much a working church. Fortunately the faithful do not pay the same fee as the tourists..

Inside are paintings, treasures, priests, the faithful and the smell of burning incense. 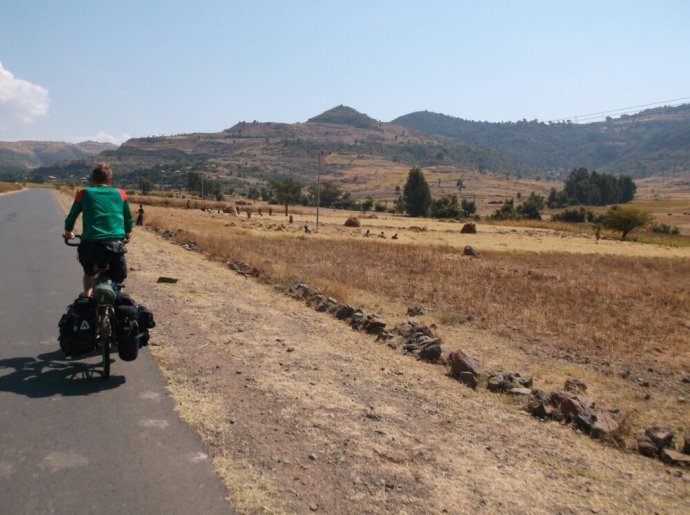 On the road again..and climbing. 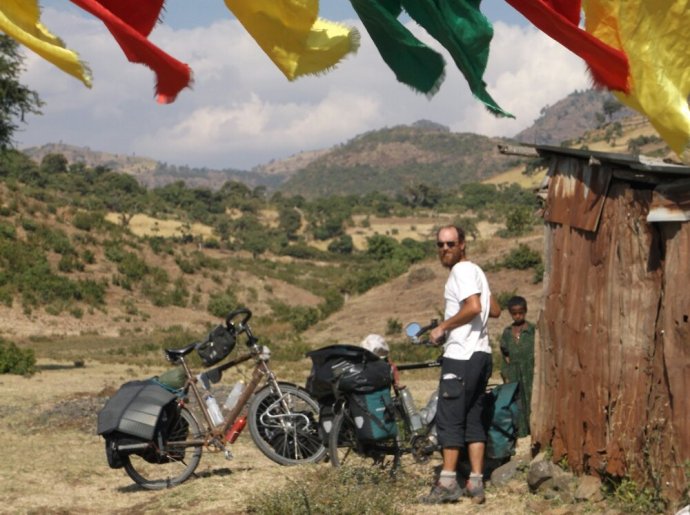 Stop off for tea at one of the road side chapels. They kindly shared their food with us. 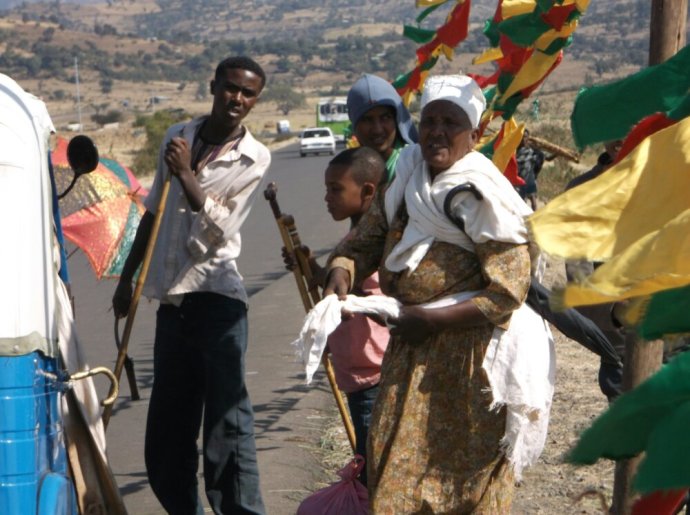 Going to church and collecting donations at the roadside

It’s always the women who do the hard work.

Food
One of the biggest rewards when cycling..

By far the most inedible dish of the Ethiopian menu, beating even raw mince meat (which is actually quite nice if you ignore the fact it’s not cooked) is this, batter. That is flour batter (dough), uncooked, served warm and floating in oil. Even I could eat a quarter of it without feeling queasy. It like eating raw bread mix in great, which is exactly what it is.

A typical Ethiopian dish and our main diet. The table cloth thing it rests on is a sour bread called injera. 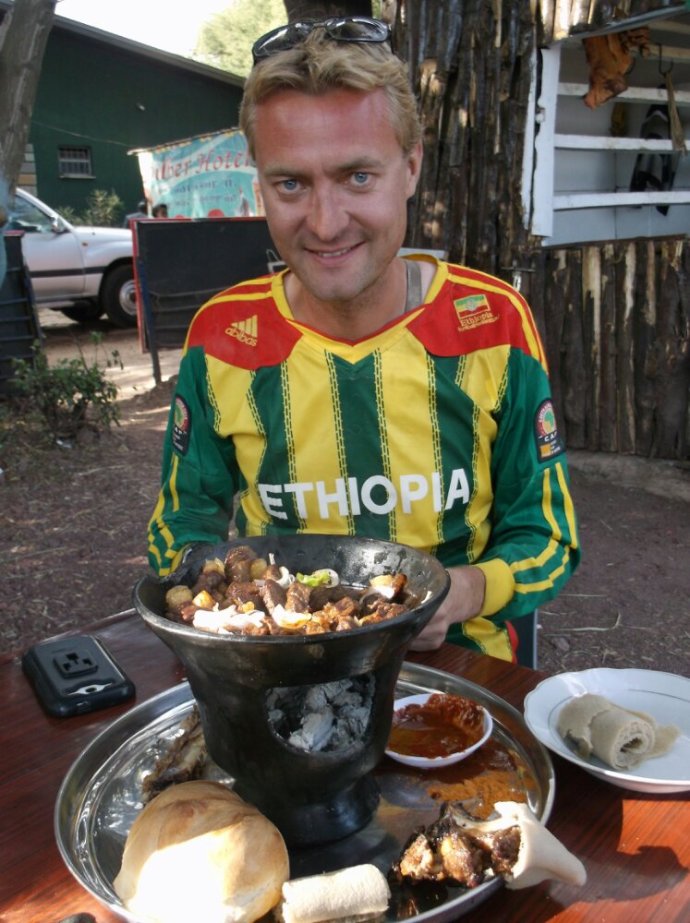 Another delight. I’ve eaten 10 times more meat in Ethiopia that in all the other countries combined. At £2 for a half kilo of ox, cooked and served on a hot plate with spices and bread. Meat eaters eden!

Various bread snacks and coffee make a good break, and of course, the famous Mirinda (over sweet Fanta, not shown here)