The first stop in Albania from the crossing is the large city called Shkoder. I soon got to understand the rules of the road – that is there are none. This also applies to cyclist so there was no problem with one way streets or pedestrianised precincts.
First goal is to get some money and cash machines are easily found in the city centre.  I punched the equivalent of 100 pounds and out popped 4 shiny crisp notes of 5000 leke. That’s going to be a problem I thought so I headed for the nearest snack shop and gorged on drinks and 3 Burek (near deep fried bread / pastry filled with meat or cheese). The total came to a few hundred. I tenderly produced the 5000 leke note and watched the shopkeepers face drop. The usual patten is they leave the shop to plead with other shop keepers for change. A few minutes later he arrived back clutching a wad of notes and started counting them out for me. Feeling a bit guilty I left a generous tip which he flatly refused. I insisted and he beamed a smile and nearly tried to hug me. At least I now have some usable ammo in my wallet.

Cycling out the city while eating an ice cream I quickly realised Albania is one of the best and safest places for cycling I have been to so far on my tour and I will enjoy it. For a start, outside the city and away from the coast there is no chance of getting run over because, for the most part there is no traffic on the roads. Many of the roads are newly surfaced, no gravel patches and decent crash barriers should you overshoot a corner.

I made a poor judgment on route. I set off down a nice stretch of road only to have it run out on me. I checked the route on my phone map and sure enough, where the surface finished the road finished. My paper map shows roads where there are only dirt tracks. I asked around, “There is a way, but you can’t go that way because the road is bad”. Now there’s a challenge! I was warned about the gradient and the quality of the road.. For 2 hours I scoffed at their dire predictions of road quality. Sure it was a bit bumpy and steep in places, but nothing really. What they didn’t warn me about and actually made be turn back is the fact the road kept forking and there were no signs. That said I made all the right calls. The last straw came when I set off from a small cafe and after 30 seconds everyone started shouting at me..  No that way..  Pointing to some tiny side road I just passed on my left.
I camped up and seriously considered turning back due to the risk of becoming seriously lost in a place with more goats than people.
I then noticed that if I make it to my intended destination the next leg suffered from the same problem. The road is on the paper map,  but not my phone map. Mind made up I settled down for the night next to a remote church in a valley with a dry river bed. A nice chap on a donkey came by for a bit of a chat. 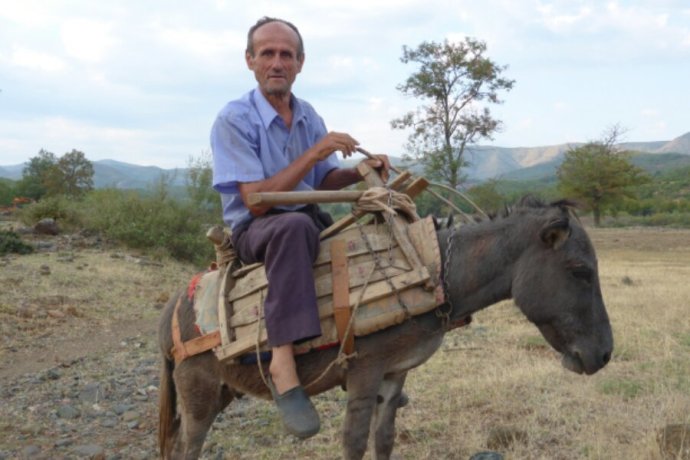 The next day proved my decision to turn back was indeed the correct one. I wished to avoid the main road from Shkoder to Kukes, but on this main road,  I counted once counted a whole hour without seeing a single car, lorry or motorbike. Cows, goats and donkeys don’t count.. I did see a few of those.

If you get on this bus, your going to Puke!

I camped up on a hill and was joined by two shepherd boys and their 20 goats. I shared some Turkish sweets and chatted with them about the bike and kit which greatly interested them.  I mentioned the tent goes up when the sun goes down. They didn’t speak English so this was all partly mime and mostly pen and paper picture drawing. The skied on the higher Hill in winter and at the end of the day the goats are penned up next to their home for the night. By now the goats has all wandered off. They asked if I will still be here and off they set to round them up.
Half an hour later they returned with freshly picked plumbs and the goats. The eldest pointed out the sun had gone down and it was time to pitch the tent. Whey wanted to pitch it and I wasn’t going to object. 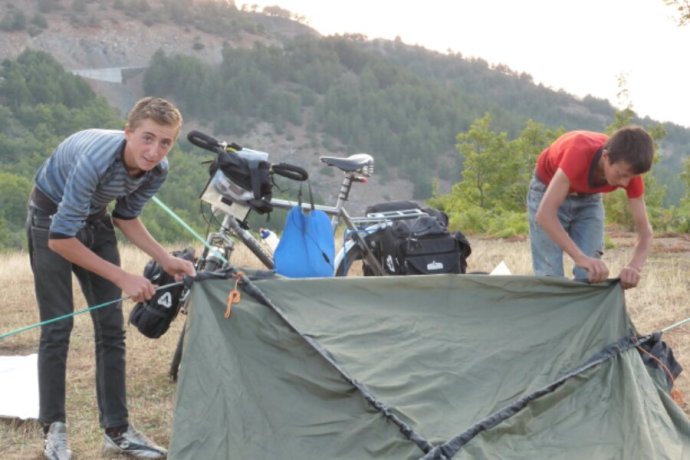 Next a police van and ambulance drove up the hill and into the Woods. The boys looked worried, illegal wood cutters one gestured. There was indeed the buzz of a chainsaw which soon stopped. On its way back the Police car
swung by us and gave a friendly wave before driving off.

Little did I realise the evening was about to begin. A mini camper parked down below and a lone figure walked up. “You have found a nice spot, can we join you?”.  The others came up,  we pooled our food and drink and had a delicious rice with bollagnaise source. We started with beer, moved to wine and then finished of the half litre of riajki (schnapps) that I had bough in Montenegro. Very unexpectedly entertaining evening.

The road wound it’s way to Kukes, the next major town and a place where I spent the night in a hotel. Filled the evening with jobs, Internet, Skype, shopping and eating. 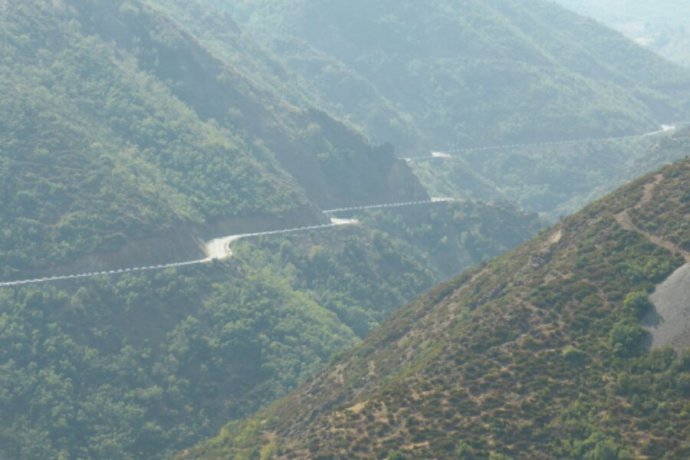 Followed the road from Kukes to Peshkopi, another small town out in the sticks. Installed myself in an upmarket hotel and set off into town to hunt out food,  snacks and sweet treats. 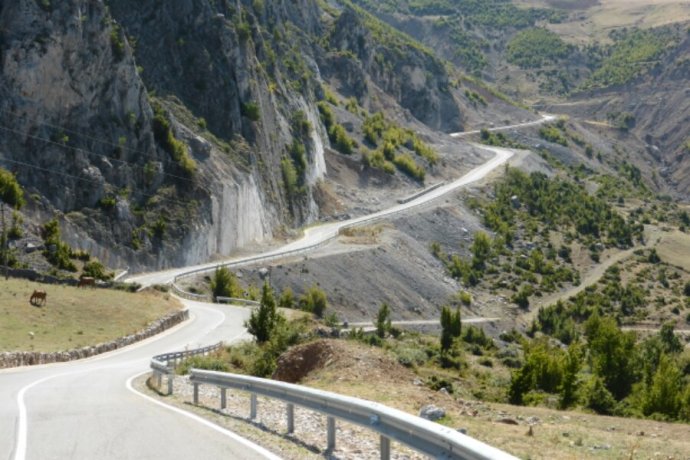 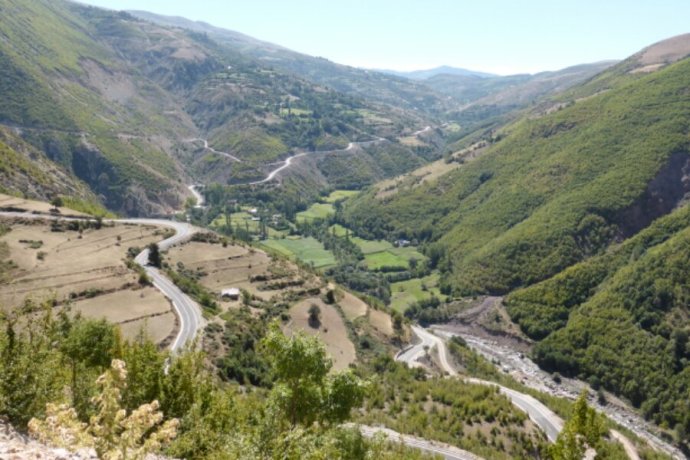 I am sad to leave Albania,  the best cycling conditions by far. The people are generous, friendly and welcoming. Despite staying two nights in a hotels and eating out all the time I struggled to spend 35 Euros!

Mascots hang from many buildings... Peculiar.

How will you find water? Is a question I get asked a lot. Answer, it's everywhere from fountains at the side of the road. Much safer than city tap water from leaked pipes..