1st June 2013: Reading to Oxford
Waved off from Thomas and Monikas for the short ride the the train station to meet Rachael and James. A sight to lift the heart of a traveller with a long road ahead. Thoughts turn to more immediate concerns such as where and when  is the next pub stop. Wheeled our way through the Oxford countryside to Reading under perfect conditions and company.

Visit Computers 4 Africa
http://www.computers4africa.org
Its a big operation. Pickup points around the UK, including Worthing. They all end up here in Maidenhead where the are wiped and processed and put onto pallets ready for container shipping. 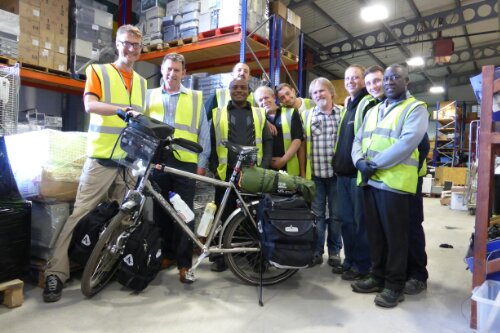 Had a superbly entertaining evening at Andy’s house.. The winged monkeys fly once more (our pub quiz name).. Wine and conversation flowed. Apologies for the short notice.

Gatwick to Worthing
Followed a well ridden route from Gatwick to Horsham to West Chiltington to Worthing. A long stretch of which is just delightful. The biggest bowl of cheesy chips I’ve ever had was scoffed down en-route. Arrived in Worthing around 3 where I met up with Sue and Dennis (neighbours)  who fed, watered and stock me up with advice for the journey ahead. Then to Portsmouth to see Stuart. With a tent pitched in the garden we ploughed our way through a bottle of rum and slept under canvas, I remember looking up Nicholas Nicolby for some reason..

What to take, what not to take.. that is the question.
Its also a bit of desert island disks; if you allowed yourself one luxury, what would it be? luckily having done past tours I already have an idea. I have with 4 panniers so space is finite and the weight must be such that the rear wheel of the bike can be lifted over obstacles. So essentially I have already failed. My bags are crammed to overflowing and their weight borders on the ridiculous. When people ask “can I feel how heavy it is?”, I step back and watch them risk a hernia. After waiting for the expletives to subside and the usual remarks of “How are you going to carry all that over to Africa?”
Then I start to make excuses.. “Well, I had to pack in a bit of a rush”, “I’m trying out a few new things out”, “I plan to shed some things on the way”. All of which are true. After I have thoroughly convinced myself the extra weight is temporary, people generally give up and I quickly change the topic of conversation. For the record, I’m aware of the situation and am working on it, but my luxury item will remain… an electric razor!
Why do it?
Its a hard choice to make to leave it all behind. Peoples reaction is usually to say “I wish I could do that”, or  “You must be brave to do all that”. I just play them down, but in my heart of hearts I know they wouldn’t do it in my position if they knew what I’ve left behind and its quite the opposite of brave. So what is it? Its the path less travelled, the road to a greater understanding about the world I live in, a chance to develop my character and pursue interests of history, archeology, architecture, diversity of cultures and religions, photography, food and drink, landscape and the people work it and not forgetting – computing and cycling. Its a goal to work towards and a bit of a challenge. Its also bit selfish, self indulgent and short term, but maybe a trip like this is just the thing to change me.
Friends and loved ones
The leaving party in Worthing was a boost. There’s nothing worse than coming your own leaving do and the people you want there don’t turn up. They where there and gave a good send off. It was a strange mix of sadness and excitement (luckily not excrement as my spell checker suggested!) 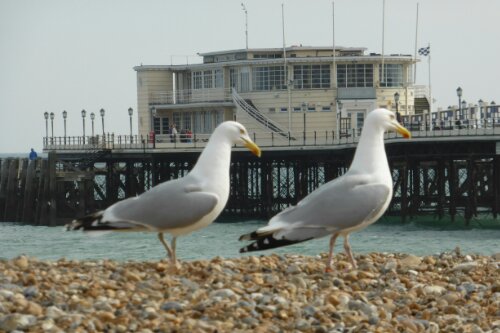 Southport – Back home
First port of call was mum and dads, where we had a relaxing evening with Sarah and Ivan. worked as a family to install a CCTV system. Its a testament to ability and ingenuity on Davids part that we got it working at all given the number of bugs in the camera software! Something that a firmware update could and hopefully will fix. I enjoyed it in a strange team building kind of way. Many feasts prepared by mum and the odd trip to the pub thrown it. When pulling cables through I found a newspaper article under the floorspace from 1924 banging on about moral decline post women’s lib (the first one!). How times change and then change again.. 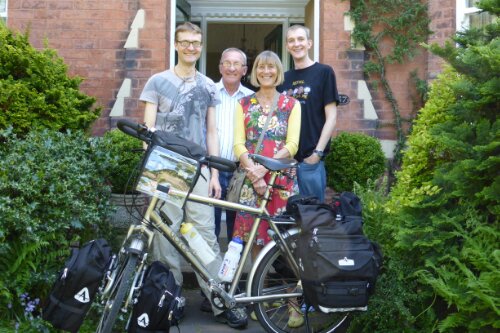 Oxford
Monika always lays on a fest fit for generals.. but when the rabble turn up and scoff the lot she doesn’t seem to mind. The usual rounds of Raspberry and Ice cold Vodka shots commenced! Fun and fuzzy head. 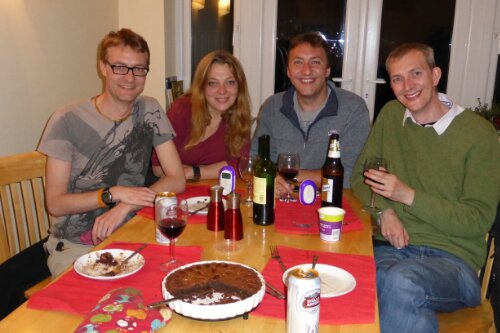